Who Are You Feeding?
by Ocean Robbins – Santa Cruz, CA 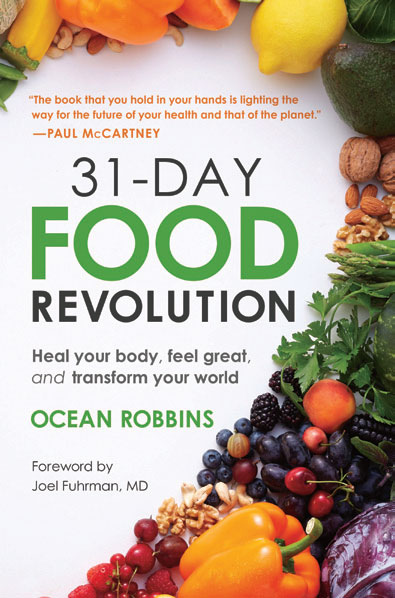 Deep in your gut, 40 trillion chemists are hard at work helping you digest your meals, making essential nutrients you can’t produce on your own, protecting you from disease, and even shaping which parts of your DNA manifest and which remain dormant.

These talented creatures are fungi, bacteria, and other single-celled organisms. And they are a bigger part of who you are than you have probably ever imagined!

While your body includes about 22,000 human genes, it also hosts as many as two trillion microbial genes that are technically not “you,” but rather benevolent guests working in exquisite harmony with your body. Some of these microbes flourish on your skin, but the vast majority take up residence in your digestive tract.

Study of the microbiome—the community of microorganisms living inside your body—could well be the most compelling frontier of health science. The digestive process breaks down food and beverage particles so that your body can absorb the nutrients it wants and excrete the rest. Trillions of organisms join in the effort. These microbes also play a critical role in shaping your appetite, allergies, metabolism, and neurological function. In fact, scientists have found that gut bacteria produce neurotransmitters such as serotonin, dopamine, and GABA, all of which play a key role in determining your mood.

Studies suggest that your gut microbiota may factor into your risk of developing neuropsychiatric illnesses like schizophrenia, ADHD, obsessive-compulsive disorder, and chronic fatigue syndrome. In other words, the bacteria living in your gut have a huge impact on the way you feel.

Which One Are You Feeding?

There’s an often-told story, reportedly from Cherokee folklore, about a Cherokee elder who is teaching his grandson about life. “A fight is going on inside me,” he says to the boy. “It’s a terrible fight between two wolves. One is evil—he is anger, envy, sorrow, regret, greed, arrogance, self-pity, guilt, resentment, lies, false pride, and ego. The other is good— he is joy, peace, love, hope, serenity, humility, kindness, empathy, generosity, truth, and compassion. The same fight is going on inside you—and inside every other person, too.”

The grandson thinks for a minute and then asks, “Which wolf will win?”

The old Cherokee replies, “The one you feed.”

When it comes to the bacteria in your gut, every time you eat, you are feeding somebody. Unfortunately, the modern industrialized diet is all too often feeding the bad guys and, just as important, starving the good.

To put it simply, “bad” bacteria tend to feed on sugar and unhealthy fats (yes, junk food!). And the single most important nutrient that good bacteria need to thrive inside you is fiber. When they have plenty of fiber, they can do their job—and your digestion, mental function, and even your mood reap the benefits.

It’s clear that fiber is critical to gut health.

Most of us are literally starving the good bacteria that would, if we only gave them the chance, be digesting our food and making the brain-boosting chemicals we need to thrive.

Inflammation is the defense response that focuses your immune system’s attention toward fighting a perceived threat—such as bacteria, a virus, or a toxin. When part of your body becomes reddened, swollen, hot, or painful, this is inflammation in action.

So far so good. But when inflammation becomes chronic, your body’s natural defenses get depleted and become unable to do their job properly because they are worn out. Constant alarms put the body in chronic stress, until its defenses are unable to function properly.

We’ve known for some time that chronic inflammation can result when your body is inundated with a barrage of threats—often stemming from food allergies, poor diet, toxins, or stress. But now, researchers are coming to believe that an often-criticalpiece of the inflammation puzzle actually lives in your gut bacteria.

How does this work? From the esophagus all the way to the anus, your digestive tract contains a lining called the epithelium, which is only one cell thick. The portion that runs through your small intestine is exquisitely designed to absorb the nutrients your body needs to thrive, while keeping out whatever might be harmful or inadequately digested. But since it’s only one cell thick, it’s very vulnerable.

According to Lita Proctor of the Human Microbiome Project at the National Institutes of Health, the “bad bacteria” that are fed by sugar and unhealthy fats can emit chemicals that compromise your intestinal lining. When your gut lining is damaged, or “leaky,” certain chemicals and proteins can cross the lining and activate an immune or inflammatory response in your body.

Glyphosate Could Be Adding Fuel to the Fire

Nearly all the soy and corn grown in the United States today–and worldwide–was genetically engineered by Monsanto (now Bayer) to withstand the company’s proprietary herbicide, Roundup. The primary active ingredient in Roundup is glyphosate. There are many problems with glyphosate, including the fact that it’s considered probably carcinogenic by the World Health Organization and by the state of California, which wants it to carry warning labels when sold.

But there’s another issue with glyphosate that’s received shockingly little attention: In 2012, the weed killer was patented by Monsanto as an antibiotic. Antibiotics kill microbes, such as bacteria. Increasing numbers of scientists believe that this chemical, millions of tons of which have been applied directly to food crops destined for human consumption, may disrupt and kill beneficial bacteria in your gut, leading to impaired immune function and a cascade of other ill effects. Prior to being purchased by Bayer in 2016, Monsanto frequently told us that Roundup was nontoxic to humans. They paid many scientists to reiterate this claim, and some pointed out that glyphosate killed weeds by interrupting a process called the shikimate pathway. The shikimate pathway is the process by which plants take carbohydrates and change them into amino acids, which are the building blocks for protein. We humans don’t have that pathway in our cells, so we were told that we had nothing to worry about. It was a pathway found only in plants and bacteria. But this is where the company’s story began to fall apart. Many of the 40 trillion microbial cells in your body are bacteria that do, in fact, depend on the shikimate pathway for the production of what are called aromatic amino acids (in case you’re wondering, aromatic amino acids don’t emit some special scent.) The aromatic amino acids produced by bacteria in this way are phenylalanine, tyrosine, and tryptophan, and they are all essential to human health.

What’s becoming increasingly apparent is that glyphosate, found at increasingly high levels in and on today’s genetically engineered foods, is having a significant and potentially damaging impact on the human microbiome.

Of course, Monsanto was quick to tell us that this was all a bunch of hogwash. But keep in mind, Monsanto also told us that another of its chemicals, DDT, was completely safe. And we now have studies proving that women exposed to DDT in the womb face a quadrupled risk of developing breast cancer. It’s never wise to trust a poison manufacturer to confirm the safety of its products.

For many people, one of the most compelling reasons to choose organic or certified non-GMO foods is to keep glyphosate out of their diet. 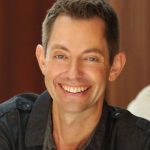 Ocean Robbins is CEO and cofounder of the 500,000-plus-member Food Revolution Network—one of the largest communities of healthy eating advocates on the planet. He has held hundreds of live seminars and events that have touched millions of lives in 190 nations. He’s served as adjunct professor for Chapman University and is recipient of many awards including the national Jefferson Award for Outstanding Public Service and the Freedom’s Flame Award.